I still remember my first adventurous bite of sashimi in the late 1970s while on a work trip in La Jolla. Raw fish, with the exception of oysters, was not the norm. The fresh clean taste of unadulterated fish and the alert sensation caused by the wasabi stunned me.  I was already working my way to Japan but this culinary experience sealed the deal.

Sushi and sashimi are so ubiquitous now that it is hard to remember that they were an intimidating novelty not so long ago.  However, being served authentic wasabi is still a rare experience, especially outside of Japan.  Most often, it’s a stand-in consisting of horseradish, mustard flour, cornstarch and food coloring.  Real wasabi is a member of the Brassicaceae family and related to cabbage, mustard and horseradish.  Growing the plant commercially is a labor of love because of the temperamental conditions.  The Japanese have grown wasabi for about one thousand years in river valleys and mountain streams, protected from direct sunlight, its roots stretching into running underground water. It can take up to eighteen months before the wasabi is ready to be harvested. The tricky growing conditions and the bigger demand than supply can drive the price as high as three hundred dollars per kilo as compared to the five dollars per kilo for the imitation. The precious price is a primary reason why genuine wasabi is so rarely served.

Real wasabi is described as having a fresher, more complex flavor, with some fruity or floral components, greenness and a bit of sweet in addition to the nasal spice. It is subtle compared to its substitute and enhances the sashimi flavor rather than overpowering it. The lower part of the plant, 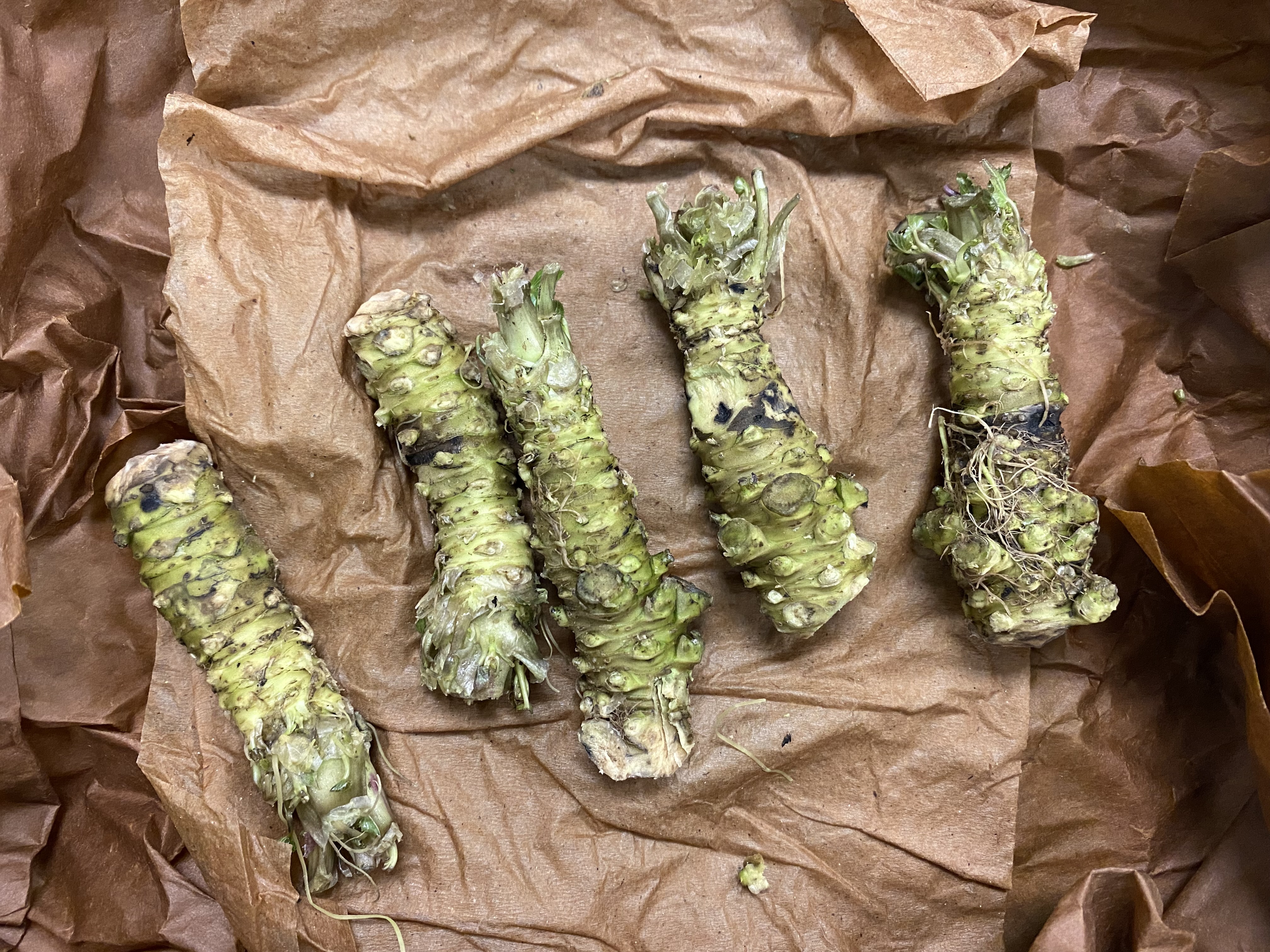 the stem is brushed clean and then shaved with a special grater.  The grated wasabi will lose its flavor in about 15 minutes, so it is grated as needed. It also loses its flavor if mixed with soy sauce.  I appreciated reading about Tyler Malek’s tasting experience. He is the ice cream creator responsible for green apple and wasabi sorbet at the inventive Portland, Oregon ice cream store, Salt & Straw, “It’s almost like eating ketchup all your life, thinking you know what tomatoes taste like, and then, one day, eating a fresh tomato and allowing it to blow your mind.”

Consuming wasabi is considered to be good for the body’s defenses and is said to be an anti-inflammatory. Wasabi contains the chemical alkyl isothiocyanate which has anti-microbial properties and hence, its prudent pairing with raw fish.  The chemical is also responsible for its pungency.

The leaves, stems, buds and flowers of the plant are all edible as well.  The leaves can be enjoyed raw, pickled, deep fried or added to cooked dishes for a punch.  They can be layered into sushi or puréed into sauces or dressings.  The buds can be thrown into salad or used as an edible garnish. 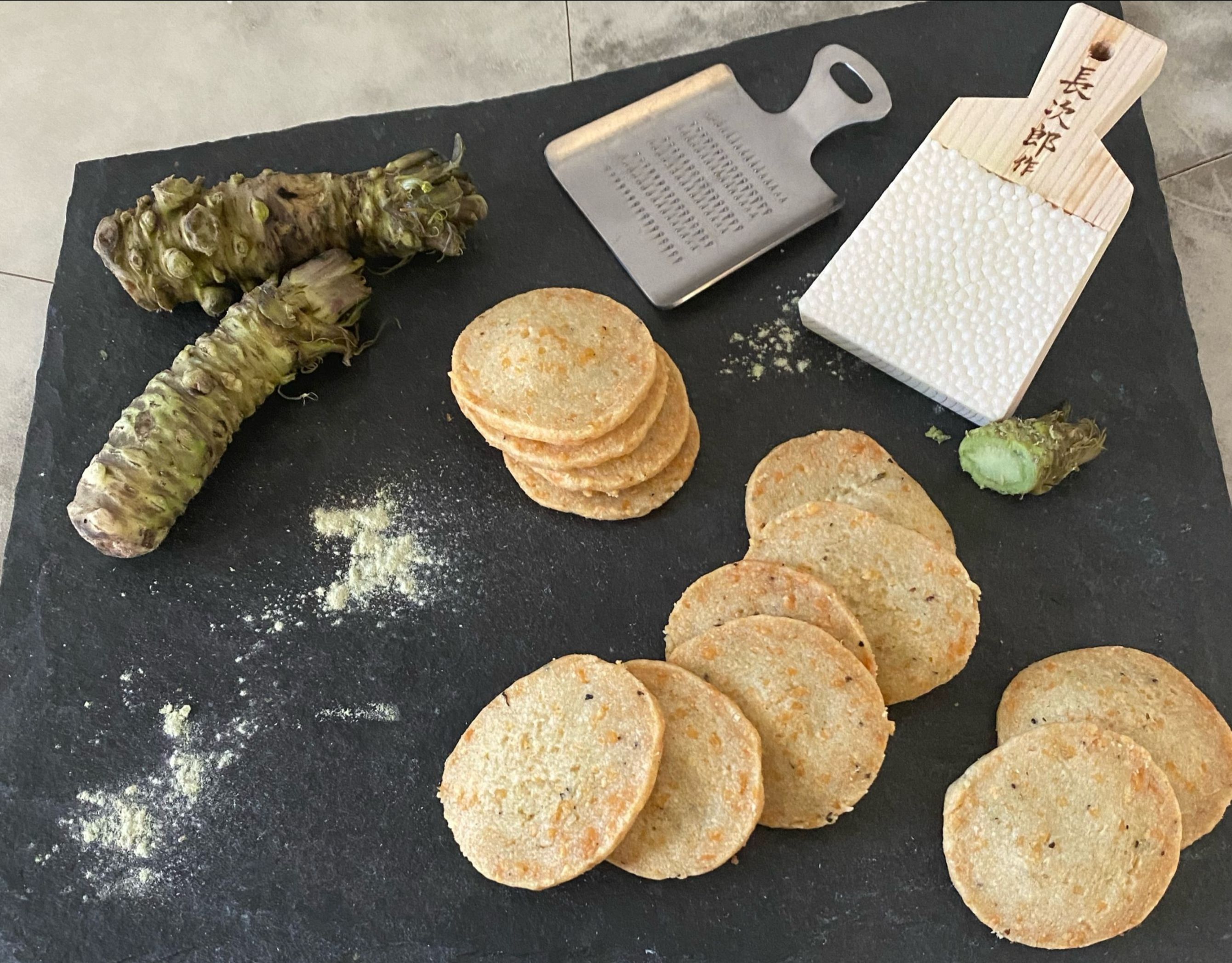 incorporating the wasabi powder. Chef Cathy commented, “I was surprised at how much more powder was needed when making the crackers than the wasabi we’re used to. Freshly grated, the wasabi alone tasted very spicy but didn’t overwhelm the dough.” Chef Basseron prepped and served red snapper sashimi and ahi tuna with freshly grated wasabi. Chef Bas commented that “It’s less strong than the product we’re used to and has a much cleaner taste. It was a tad sweeter as well.” Consuming fresh wasabi was a delightful way to warm our taste buds and bodies during a particularly cold stretch of winter.

The Pratt Test Kitchen is a series of programs launched in the fall of 2021 by the Enoch Pratt Free Library to celebrate the diversity and creativity of the Baltimore (and beyond) culinary scene.  There is a kid’s virtual cooking program with ingredient kits supplied by the library, gardening seminars and engaging conversations about food and social justice.  In addition, The Pratt Test Kitchen hosts free evening 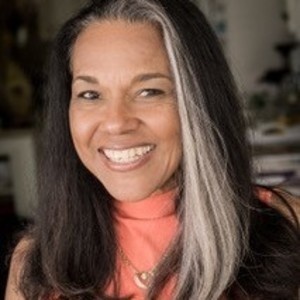 talks by several well-known authors, (one of whom we have previously spotlighted in our monthly book review). On Wednesday February 23rd, the library will host Baltimore transplant, Toni Tipton-Martin, the Editor-in-Chief of Cook’s County Magazine by America’s Test Kitchen and author of The Jemima Code, Two Centuries of African American Cookbooks and Jubilee, Recipes From Two Centuries of African American Cooking.  Tipton-Martin is a culinary journalist as well as an activist and recently announced her plans for the Toni Tipton-Martin Foundation to support future generations of women in food.

She and her husband are restoring a 100-year-old row house, one of the “Painted Ladies” in Baltimore, in which to live as well as house her large historic cookbook collection. “Part of what excited me about coming to Baltimore was the opportunity to reclaim this historic architecture and to explore its food history and to share its message of hope with the generations that could benefit from role models in the food world” Tipton-Martin mentioned in an interview with the Baltimore Sun.

The free virtual event will be on Wednesday, February 23rd at 7:00pm and will be streamed on the Pratt’s Facebook and YouTube pages. The program is part of the Pratt Test Kitchen, but also is a feature of the library’s robust Black History Month programming. Please tune in to hear more from this wonderful asset to our culinary community.